While analytical laboratories may still rely to some extent on trial-and-error approaches, there is agreement that this is increasingly less effective as systems become more complex. Regulatory bodies are putting increasing pressure on pharmaceutical companies to incorporate Quality by Design (QbD) approaches throughout the drug development process. QbD is defined in the ICH Q8 guideline as “A systematic approach to development that begins with predefined objectives and emphasizes product and process understanding and process control, based on sound science and quality risk management.”

Developing effective and robust separations methods can be a very time-consuming process. A comprehensive approach to method development would be thorough investigation of the design space for any given mixture or sample including buffer, column, solvent, time, temperature, etc. Given the time constraints and limited resources in any R&D laboratory, however, this type of broad scope investigation is unrealistic.

New types of chromatographic techniques (UHPLC, HILIC, ion exchange chromatography, etc.) have demanded the need for new modeling tools. This also led to the need for translation of methods from one technique to newer techniques (HPLC to UHPLC, for example). Furthermore, as pharmaceutical R&D has expanded investigation of new drugs from small molecules to proteins and bio-molecules, many of the old rules no longer apply.

The ability to model the behavior of a sample in silico provides chromatographers with a number of advantages:

Greater efficiency in method development—it is difficult to estimate the number of hours required to identify a suitable method for separation of a mixture. An experienced scientist will rely on their knowledge while an inexperienced colleague may struggle with the same separation. As the number of experienced chromatographers decreases across organizations, and the existing scientists are retiring, software to assist those less experienced becomes more attractive.

With such a large number of variables (temperature, gradient, pH, salt concentration, etc.) it is advantageous to use all available knowledge and tools to ‘get ahead’. Increased efficiency can be realized not only in identifying an optimal method faster but also increasing throughput and decreasing scale-up time.

Risk mitigation through robust methods—this is the ideal result of a method development project. By applying QbD principles and understanding the analytical design space of a sample, the chromatographer can understand, reduce, and control sources of variability; and use this information to create a method that is reliable and robust. Simulation of methods provides scientists the luxury of thoroughly investigating method development space with limited consumption of resources and time, for the best result.

Economic considerations—while there is a cost in man hours and time spent on method development, there is also unrecoverable expenditure on consumables (solvents, columns, etc.). In being able to investigate chromatographic space in silico, this time and expenditure can be greatly reduced.

Green chemistry—the ability to model separations not only reduces the volume of waste, it may also help us reduce environmental impact. Consider the case of acetonitrile shortages in recent years. The ability to use alternative methods, i.e., replacing acetonitrile with methanol, not only lead to reduced cost but also has the side effect of more environmentally safe waste.

Software provided with chromatographic instruments delivers many useful capabilities to execute experimental runs and control instruments. Simulation software, however, is typically purchased separately. Several commercial software packages are available, i.e., DryLab, ACD/LC Simulator (from ACD/Labs), ChromSword, and Osiris, each of which provides different advantages and limitations (an exhaustive list is outside the scope of this article).

Commercially available method optimization software is typically built on one of three models—simulations based on molecular structure, retention based modeling, and statistical modeling. Each has its pros and cons with details in their implementation that appeal to different applications.

Data input—flexibility of data import into a system from the instrument is an important consideration when dealing with multiple experiments under varying conditions. Lack of standardization of chromatographic data formats today, however, means that unless data from separations is transferred into Excel or similar software, scientists are left to transcribe information from one system to another. Direct data import from chromatographic runs into third-party modeling software, in the instrument format, is ideal since it avoids transcription errors and saves time in data input. ACD/Labs provides the only software (ACD/LC Simulator and ACD/GC Simulator) with instrument vendor-agnostic support of analytical data at this time.

Data visualization—the ability to review and interrogate data is of utmost importance in method development and optimization, and software vendors implement various tools to meet chromatographers’ requirements. While 3D modeling, offered by DryLab, has enjoyed popularity in the community, the question of applicability still remains. A significant amount of data input (upwards of 45 injections is not unreasonable for simultaneous optimization of 3 factors) is required for effective 3D modeling, which in itself is counter-intuitive if time and resource efficiency is the ultimate goal.

Automation—ACD/AutoChrom (from ACD/Labs) and ChromSword both provide automation through instrument control. AutoChrom provides automation of the most popular Waters Empower and Agilent ChemStation systems and keeps the scientist in control by allowing user input at key stages of the method development process. This software is best suited for challenging separations such as stability indicating methods and forced degradation studies.

Custom Modeling—while third-party modeling software may cover a broad range of structure and method development space, there is nothing better than the ability for scientists to create their own models. ACD/LC Simulator was the only software known to the authors at the time of publication that offers this capability. Work published by world class chromatographers Patrik Pettersson and Mel Eureby demonstrates the use of ACD/LC Simulator in successfully modelling protein and HILIC separations. 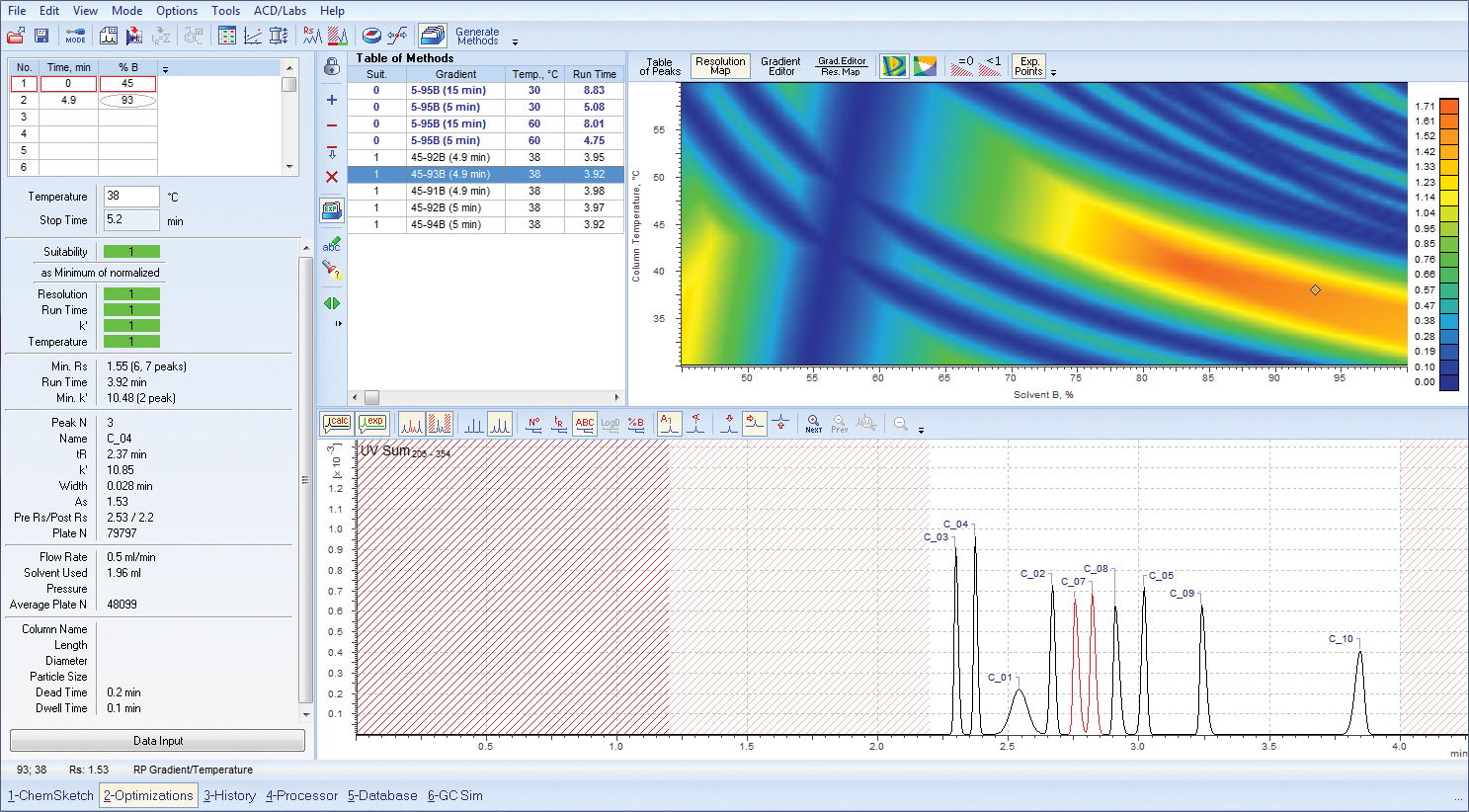 Physicochemical property predictions such as logD and pKa can also help in method development and optimization. In a general sense, being able to predict behavior with respect to pH can offer insights into method development challenges. ChromSword and ACD/Labs software both provide property predictions, and the latter have been leaders in this field for almost two decades with applications across various areas of research and industries.

As the science of separations evolves and the compounds of interest change, the software to support scientific research and development will need to develop alongside. Software vendors need to satisfy the needs of their customer organizations in releasing the time of valuable scientists for innovation thus releasing them from monotonous and tedious tasks. If your organization has yet to invest in software for modeling separations, it will likely come in the future and many of the topics raised here should be kept in mind to ensure you get the best return on investment.