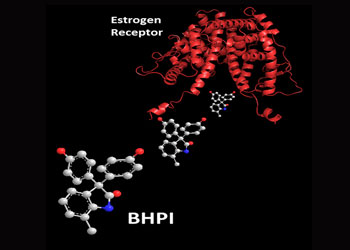 An experimental drug rapidly shrinks most tumors in a mouse model of human breast cancer, researchers report in the Proceedings of the National Academy of Sciences. When mice were treated with the experimental drug, BHPI, “the tumors immediately stopped growing and began shrinking rapidly,” said Univ. of Illinois biochemistry professor and senior author David Shapiro. “In just 10 days, 48 out of the 52 tumors stopped growing, and most shrank 30 to 50%.”

The key to the drug’s potency lies in its unusual mode of action, Shapiro said.

“BHPI works through the estrogen receptor protein, but in a way that is different than estrogenic hormones,” he said. “The drug hyperactivates a pathway called the unfolded protein response, which estrogens normally use to protect cells from stress and help them grow.”

Rather than blocking the stress response, BHPI kicks the UPR into overdrive, said MD/PhD student and lead author Neal Andruska.

“This drives the cancer cells from using the UPR in a protective way into making it a lethal pathway,” Andruska said. “In this way, it stops growth and eventually kills many types of breast, ovarian and endometrial cancer cells that contain estrogen receptor.”

BHPI shuts down the production of new proteins, including proteins that normally keep the stress response pathway in check, Andruska said.

“Eventually, many cancer cells die—in part because they can’t make any new proteins,” he said.

BHPI spurs a number of events in the cell, including the opening of calcium channels in the endoplasmic reticulum, a special intracellular compartment. The influx of calcium into the cytoplasm sets off a cascade of events that prepare the cell to deal with stress. The cells try to pump the calcium back into its compartment, but BHPI keeps the calcium channels open, allowing the calcium to flow back into the cytoplasm. After about 30 min of this “futile cycle,” the cells run low on energy.

“Without enough energy, cancer cells don’t grow,” Shapiro said. The cascade initiated by BHPI eventually turns on four pathways, “each of which could potentially contribute to the death of the cancer cells,” he said.

Because the UPR pathway is overexpressed in therapy-resistant cancer cells, the drug is especially effective in targeting estrogen receptor-positive cells that are resistant to tamoxifen and other anti-cancer drugs, the researchers report.

“BHPI works equally well in the presence or absence of estrogen,” Shapiro said.

The mice that received the drug tolerated it well, with no weight loss or other negative side effects, the researchers said.

“It’s still in the early days for this drug, and there are many hurdles to overcome to bring BHPI to the clinic,” Shapiro said. “But so far, it’s been clearing the hurdles by a wide margin.”