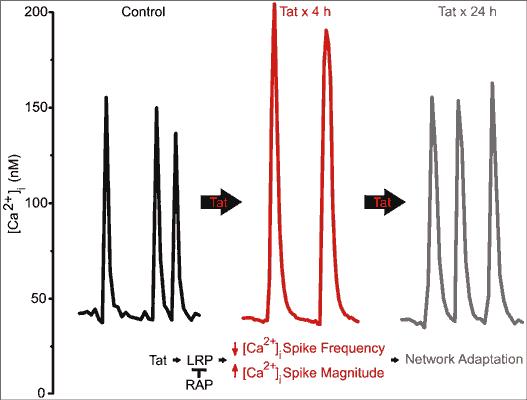 Nearly half of HIV infected patients suffer from impaired neurocognitive function. The HIV protein transactivator of transcription (Tat) is an important contributor to HIV neuropathogenesis because it is a potent neurotoxin that continues to be produced despite treatment with antiretroviral therapy.

Researchers at the University of Minnesota found that Tat altered the activity of networked neurons and that the network adapted to the presence of the toxin. The research article entitled, “HIV-1 Tat-Induced Changes in Synaptically-Driven Network Activity Adapt During Prolonged Exposure” is featured in the journal ‘Current HIV Research’.

The authors report that Tat alters the excitability of networked neurons by a process that required binding to cell surface proteins. Lead author Kelly Krogh, Ph.D., now a research fellow at Harvard Medical School and Massachusetts General Hospital, suggests that “the most notable discovery from this study is that the activity of the networked neurons adapted in the sustained presence of the HIV protein.” Senior author Professor Stanley Thayer, Ph.D., speculates that “the adaptations may improve survival at a cost of impaired network function. Perhaps some of the deficits caused by HIV in the brain result from coping mechanisms gone awry.”

Infection with HIV is associated with increased incidence of new-onset seizures in a significant percentage of patients, however the specific cause of seizure disorders remains unknown. Doctoral student Mathew Green cautions “that the electrical changes recorded in vitro may not correspond to EEG changes in HIV+ patients, but this work does establish the principle that networks of neurons adapt to the presence of a toxic HIV protein and suggest that viewing EEG changes as an adaptive response might facilitate therapeutic intervention.” Future studies will focus on the mechanism underlying changes in network function to identify new targets for the treatment of neurological disorders in HIV+ patients.