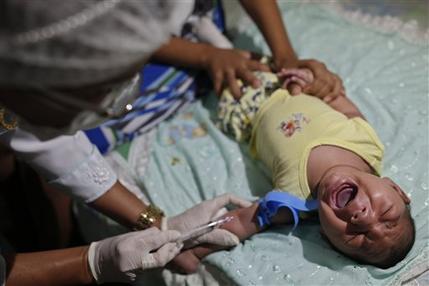 Often drowned out by the dire warnings and fear surrounding Zika, some medical professionals are saying that Brazil and international health officials have prematurely declared a link between the virus and what appears to be a surge in birth defects.

A few even argue that the Brazilian government is being irresponsible, given that a connection hasn’t been scientifically proven between the mosquito-borne virus and the birth defect known as microcephaly, which causes infants to be born with abnormally small heads.

“It’s a global scandal. Brazil has created a worldwide panic,” said Alexandre Dias Porto Chiavegatto Filho, a professor of epidemiology at the University of Sao Paulo, one of the most-respected universities in Latin America. “I’m not saying that Zika is not causing microcephaly, but I am saying that the ministry has yet to present any scientifically credible evidence to support that conclusion.”

Chiavegatto and others argue there are still too many unanswered questions to blame Zika. Why are the vast majority of the cases of microcephaly being reported in Brazil? Why haven’t they also shown up in proportional numbers in other countries hit hard by Zika, such as Colombia? (The answer, some say, is that Brazil was hit by Zika first, and microcephaly cases might be expected to crest elsewhere in the months ahead.)

And how can conclusions be drawn from government statistics that are flawed and possibly vastly underreported in the past, before Brazilian officials required doctors to report microcephaly cases?

In an article published Wednesday by the Annals of Internal Medicine, 14 Brazilian and American researchers said the link between Zika and microcephaly “remains presumptive.” The strongest evidence is circumstantial, they said, and there are challenges in confirming the connection.

But Brazilian Health Minister Marcelo Castro recently said he was “absolutely sure” of a causal link between Zika and microcephaly. He and other scientific experts around the world have pointed to studies that detected the presence of Zika in the brains of dead fetuses and in the placentas of babies diagnosed with microcephaly in the womb.

While visiting Brazil on Wednesday, Margaret Chan, director-general of the World Health Organization, said microcephaly can be caused by many things but that her organization was affirming that “Zika is responsible (for it in Brazil) until evidence to the contrary emerges.” And the Atlanta-based Centers for Disease Control and Prevention has warned pregnant women against traveling to more than 30 destinations where the virus has been registered, most in Latin America.

Every week, the evidence is “getting stronger and stronger,” Dr. Anthony Fauci, director of the National Institute of Allergy and Infectious Diseases, told a U.S. Senate committee Wednesday. He cited several published cases where the virus was found after fetal or newborn deaths.

Still, despite the heavyweight support and anecdotal evidence, some critics are not satisfied.

“There appears to be a sort of scientific illiteracy within the ministry that has led them to mix up association with causality,” said Correia. “They are confusing hypothesis with fact.”

Correia compared the situation to finding a bystander at the scene of a murder. That person could have committed the crime or just have been a witness.

Correia and Chiavegatto stressed that another unknown factor, either alone or in tandem with Zika, might be triggering microcephaly. Both suggested that because the majority of mothers of babies with the condition are poor women from Brazil’s less-developed northeast, this theoretical unknown factor could be lurking in poverty and poor living conditions.

Some speculate that politics, not science, may have pushed Brazil’s health ministry to jump the gun on Zika. The line of thinking is that President Dilma Rousseff’s deeply unpopular, scandal-plagued government is facing so many problems that health officials felt compelled to err on the side of caution and a robust response.

This week, the CDC and Brazilian health officials started work in Paraiba aimed at trying to scientifically establish the link.

Several CDC teams hope to recruit more than 100 mothers with babies with microcephaly, and two to three times that number of mothers with healthy infants born around the same time and in the same area. The recruitment phase will take at least four or five weeks, and it’s unclear how long the teams will need to analyze the data.

There are also many questions surrounding Brazil’s baseline of microcephaly cases.

Since October, the Health Ministry says 5,640 cases of microcephaly have been reported. Of those, 950 have been discarded and 583 have been confirmed as microcephaly. The remaining cases are still being investigated.

Before this outbreak, authorities said that on average Brazil had about 150 reported cases a year. If true, that would mean the country had a rate that was only a fraction of that of much richer countries. “It is possible that the baseline number in Brazil includes a lot of underreporting,” said Ganeshwaran H. Mochida, a pediatric neurologist and researcher at Boston Children’s Hospital.

And of the 583 confirmed cases of microcephaly, only 67 have been connected to Zika by blood tests. Government health officials argue that the presence of the virus can’t always be detected, as it doesn’t stay active in the body more than a few weeks.

There are also anomalies, such as in southern Sao Paulo state, far from the hard-hit northeast. On Jan. 30, the Health Ministry reported 101 cases of microcephaly, a huge jump from the total of 18 for the two previous months combined.

“It’s very difficult to make any conclusions based on this data,” said Eugene Brusilovskiy, a statistics lecturer at the University of Pennsylvania. “The weight of the reporting is not uniform. There is also not uniformity from state to state, or from week to week.”