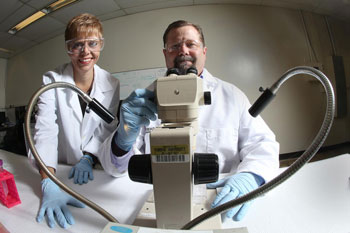 Purdue Univ. researchers have identified a new class of chemical insecticides that could provide a safer, more selective means of controlling mosquitoes that transmit key infectious diseases such as dengue, yellow fever and elephantiasis.

Known as dopamine receptor antagonists, the chemicals beat out the neurotransmitter dopamine to lock into protein receptors that span the mosquito cell membrane. Disrupting the mechanics of dopamine—which plays important roles in cell signaling, movement, development and complex behaviors—eventually leads to the insect’s death.

The researchers used the mosquito genome to pinpoint chemicals that will be more selective than current insecticides, which bind readily to molecules in humans and non-target insects, said Catherine Hill, professor of entomology and Showalter Faculty Scholar.

“These are sophisticated designer drugs,” she said. “They’re like personalized medicine for mosquitoes—but in this case, the medicine is lethal.”

Hill’s team showed that DAR antagonists have high potency for both the larval and adult stages of the Aedes aegypti mosquito—which transmits yellow fever, dengue and chikungunya—and Culex quinquefasciatus, the vector of West Nile virus and the disfiguring disease elephantiasis.

Effective pest control has historically been important in slowing the spread of mosquito-borne diseases. But overuse of antibiotics and insecticides has led to the rise of drug-resistant strains of infectious diseases and the emergence of mosquitoes that can withstand conventional pesticides, a “double whammy,” Hill said.

“There’s an urgent need for new insecticides,” she said. “We are seeing a resurgence of infectious diseases that for the last 50 years we had the luxury of controlling with antibiotics and modern medicine. These diseases are increasingly going to become a problem for people everywhere.”

The research team designed DAR antagonists to disrupt molecules that are crucial to mosquito survival. The chemicals are structurally distinct from existing insecticides and target a different biochemical path in the mosquito.

The team is mining a group of about 200 DAR antagonists to find the most promising chemicals for commercial products. The insecticides could be cost-effective compared with current products and would have low environmental impact because of their selectivity, Hill said.

The researchers are also taking steps to minimize the risk that the insecticides could bind with human dopamine receptors, said Val Watts, professor of medicinal chemistry and molecular pharmacology and co-author of the studies.

“Many of the compounds we’ve identified are selective for mosquito receptors versus human receptors—some at a more than one hundredfold,” he said. “Also, some of these compounds are already used as treatments for diseases such as schizophrenia and depression. They are safely handled by physicians and pharmacists every day.”

The tougher challenge may be ensuring the insecticides do not affect beneficial insects such as honeybees. While the researchers have identified chemicals that are highly selective for mosquito receptors, they are also exploring the possibility of heightening insecticide specificity by using allosteric modulators, molecules that act like dimmer switches, dialing up or down the cell’s response to dopamine.

Similar protein receptors exist in the African malaria mosquito, the sand fly and the tsetse fly, suggesting that DAR antagonists could help control these disease-transmitting insects as well.

“We’re going after all the big ones,” Hill said.

ENTRIES OPEN:
Establish your company as a technology leader. For 50 years, the R&D 100 Awards, widely recognized as the “Oscars of Invention,” have showcased products of technological significance. Learn more.