In recent years research has presented important new findings regarding the mechanism of action of familial chylomicronemia syndrome (FCS), a rare genetic disease that affects production or functionality of lipoprotein lipase (LPL), an enzyme necessary for the metabolism of triglycerides (TG).  FCS patients are at risk of developing severe hypertriglyceridemia (HTG) and TG-induced pancreatitis. The role of apolipoprotein C-III (apoC-III) in regulating serum TG has presented a promising new avenue of research in the effort to control elevated TG levels.

Mechanistically, apoC-III modulates plasma TG through inhibition of LPL and other LPL-independent pathways including blunting of receptor mediated clearance of TRLs from the liver, inhibition of hepatic lipase activity, and promotion of the intrahepatic assembly and secretion of TG rich VLDL particles. Humans with loss of function mutations of the APOC3 gene display lower plasma TG and LDL-C levels, increased HDL-C levels, reduced cardiovascular disease (CVD) and extended lifespan. As a result, strategies to inhibit apoC-III may present a viable strategy to lower disease-causing elevated TG levels.

Volanesorsen (formerly ISIS-APOCIIIRx), a generation 2.0+, 2′-O-(2-methoxyethyl) (2′-MOE) antisense oligonucleotide (ASO), is the most advanced pharmacological inhibitor of apoC-III. While traditional drugs directly bind or modify the proteins associated with diseases, the single-stranded, DNA-like antisense drugs are designed to prevent their formation. They work by binding to a specific RNA sequence and elicit degradation of the RNA through the action of a naturally occurring cellular enzyme called RNase H1 (Figure 1). This mechanism allows antisense drugs to selectively inhibit a specific disease-associated protein, and may also offer the potential to target proteins that are not amenable to other drug technologies. Because of its proprietary design, volanesorsen is highly specific for reducing apoC-III mRNA translation, while significantly reducing the potential for unintended off-target pharmacology. Its chemical modifications make it extremely stable, with an extended tissue half-life that supports administration via weekly injection. As an antisense drug, it is not metabolized by the CYP450 system and has a minimal risk of interacting with drugs metabolized through these pathways.

Volanesorsen is an exemplar of antisense technology, demonstrating all of the optimal properties inherent in this drug class. It is highly water soluble and can be administered in saline via subcutaneous injection without special formulation. It is also unable to cross the placenta and blood brain barrier, so systemic administration affects specific targets in the periphery. Volanesorsen is rapidly and effectively absorbed after systemic administration and is distributed to organs throughout the body, including the liver, where apoC-III is synthesized. In the liver, volanesorsen crosses the hepatocyte cell and nuclear membranes and binds to a specific site on apoC-III mRNA, to effectively prevent translation of the apoC-III protein.

Potential use in the treatment of FCS

Patients with FCS often have severely elevated TG levels (e.g. fasting TGs > 1,000 mg/dL), and are at risk of developing potentially fatal pancreatitis and other serious conditions. Current treatment options for FCS are limited and include use of drugs such as fibrates, which are often insufficient to reduce TG, and a very restrictive low-fat diet.

Following administration of 300 mg/wk of volanesorsen for 13 weeks via subcutaneous injection, three FCS patients in an open label trial showed significant, rapid, and prolonged reductions in mean fasting plasma apoC-III (-81%) and TG (-69%) levels. During the study, all patients achieved a TG level < 500 mg/dL, a level that has been reported in the literature to significantly lower the risk of pancreatitis. Patients treated with volanesorsen also showed a decrease in fasting TG levels in chylomicrons and in plasma apoB-48 levels, an index of the number of chylomicron particles. 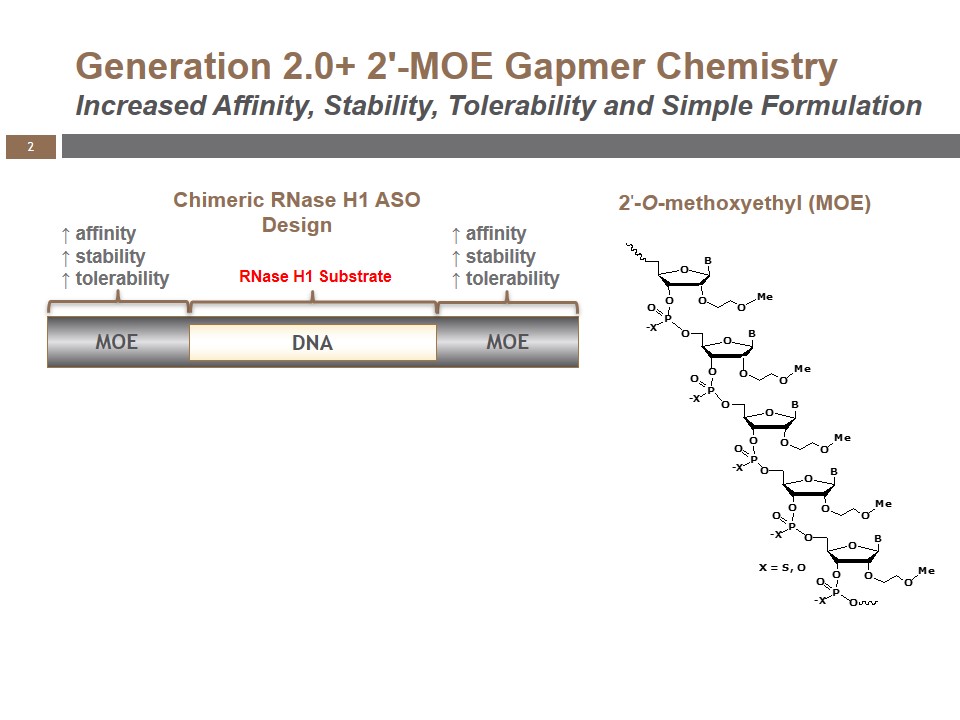 In a Phase 2 trial, patients with high to very high TG levels treated with 300 mg/wk of volanesorsen administered for 13 weeks showed substantial lowering of apoC-III and TG of -80% and -71%, respectively. Similar reductions in these clinical endpoints were observed when co-administered with fibrates. In a population of type 2 diabetics with high TG levels, volanesorsen also significantly reduced apoC-III (-88%) and TG (-69%) levels and improved glucose control by multiple measures, including decreased HbA1c levels, improved insulin sensitivity and decreased fasting glycated albumin and fructosamine. Volanesorsen was also shown to increase HDL-C in all patient populations. In these studies, volanesorsen was well tolerated and there were no clinically significant safety issues.

Volanesorsen is currently in two Phase 3 studies – one for FCS  (the APPROACH study, NCT02211209) and a second for another ultra-orphan indication, familial partial lipodystrophy  (FPL-the BROADEN study, NCT02527343), a genetic disorder characterized by high TG, abnormal fat distribution across the body and a range of metabolic disorders.

Volanesorsen incorporates the proprietary antisense technology developed at Ionis Pharmaceuticals, Inc., and is being developed with plans for commercialization by Akcea Therapeutics, a wholly-owned subsidiary of Ionis. Based in Cambridge, Massachusetts, Akcea is a development and commercialization company focused on transforming the lives of patients with serious cardiometabolic lipid disorders. To learn more about Akcea, including its clinical programs, visit www.akceatx.com.