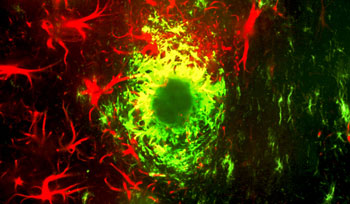 Memory and as well as connections between brain cells were restored in mice with a model of Alzheimer’s given an experimental cancer drug, Yale School of Medicine researchers reported in the Annals of Neurology.

The drug, AZD05030, developed by Astra Zeneca proved disappointing in treating solid tumors but appears to block damage triggered during the formation of amyloid-beta plaques, a hallmark of Alzheimer’s disease. The new study, funded by an innovative National Institutes of Health (NIH) program to test failed drugs on different diseases, has led to the launch of human trials to test the efficacy of AZD05030 in Alzheimer’s patients.

“With this treatment, cells under bombardment by beta amyloid plaques show restored synaptic connections and reduced inflammation, and the animal’s memory, which was lost during the course of the disease, comes back,” said Stephen M. Strittmatter, the Vincent Coates Professor of Neurology and senior author of the study.

In the last five years, scientists have developed a more complete understanding of the complex chain of events that leads to Alzheimer’s disease. The new drug blocks one of those molecular steps, activation of the enzyme FYN, which leads to the loss of synaptic connections between brain cells. Several other steps in the disease process have the potential to be targets for new drugs, Strittmatter said.

Yale’s Christopher H. van Dyck, a co-author of the paper, and Strittmatter have initiated a multi-site clinical trial to determine whether the drug can also benefit Alzheimer’s patients.

ENTRIES OPEN:
Establish your company as a technology leader. For 50 years, the R&D 100 Awards, widely recognized as the “Oscars of Invention,” have showcased products of technological significance. Learn more.